found on catetos blog and found it worth to spread here also: 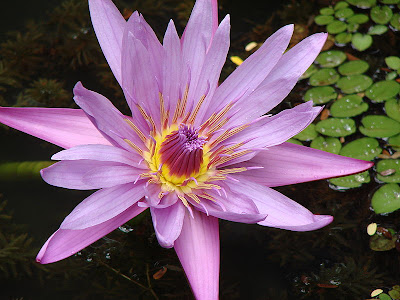 (Disclaimer: I have never been member of any Prince official website).

Just a few years ago, Prince received an award for being one of the pioneer musicians in using the internet to promote and distribute their work, and I think it was rightly awarded. He's been using the net since the late 90s, and if we look at the meaning of 'pioneer', he was one of those, indeed. Now, the success of his subsequent websites has been diverse to say the least.

The initial efforts (www.thedawn.com and www.love4oneanother.com) were warmly received by fans, until the controversial story of love4oneanother.com (where Prince tried to unite all other fansites with his own one, in a move which proved to be more another hint of overcontrolling attitudes than anything else). But that was then, and I'm not going to digg into old dirt.

www.npgmusicclub.com proved to be more effective, and while it lasted, it provided a significant amount of unreleased Prince music, besides giving possibilities to fans to buy privileged tickets for live shows. I wouldn't go as far as to say that subscribers were completely happy about it, but at least it had interesting content. However, it ended in 2006 for reasons unexplained to date.

Then it was time for www.3121.com, where the big change is that music was severely lacking (with only a few exceptions). The regular releases of the NPGMC were missing, and it seemed an halfhearted effort to get online presence, after the disappearance of npgmc.com.

Then it was the time for www.lotusflow3r.com, launched early in 2009. The initial hype, and the apparently professional design of the site, convinced some fans (including yours truly) that this time, Prince was leading a serious effort to fully take profit of the many possibilities offered by internet in 2009. There were supposed to be loads of exclusive content, tickets for fans, and countless other items, with the headline of 'An entirely new galaxy awaits'. Amognth the icings on the cake, there was also an exclusive t-shirt for initial subscribers. All of that costed 'only' $77.

Now here we are, in late September 2009. Almost nothing from the many announced contents in Lotusflow3r.com have been provided: besides the three official albums of the Lotus flow3r release, only a handful of videos/songs, pretty much no news whatsoever regarding the activity in the world of Prince, and besides, some subscribers continue reporting that they have not received their exclusive t-shirt thus far. All of this, among the wide disappointment of Lotusflow3r.com subscribers, who are seeing very little matter to compensate for their hard-earned $ 77.

Worse of all, Prince has been using an external webpage, www.drfunkenberry.com, as a semi-official outlet to provide hints, news and sometimes even songs or snippets of songs to fans, as he did yesterday with a rehearsal take of Why you wanna treat me so bad. All of this content should, obviously, be first posted at the official site, Lotusflow3r.com, even if later it could be distributed to other fansites. But consistently, Prince continued ignoring his own official, much hyped website, to keep on feeding a blog devoted in great part to celebrities gossip.

It is hardly surprising that subscribers of the official site feel disappointed: they believed the initial claims from Prince's environment about the interest of the new site. However, they have only seen a brilliant framework, developped with the last technologies but virtually devoid of anything of interest, and the holy grail (aka the old, unrleased classic recordings of Prince which make the rounds in the net in unofficial fan compilations) keep being locked in the vault.

Now, what are the reasons for this illogic behaviour (ye, I know it is foolish to look for logic in princeland)? It is really difficult to understand: in this case, there was clearly a significant effort in the deployment of lotusflow3r.com and apparently, a good team of web developpers had been signed. So, why to put such a shining envelope, and then provide nothing to fulfill fans expectations??

Maybe it is due to the classic 'sudden-lack-of-interest' from Prince: he's been known to loss interest on any new project, as soon as he is done with it. Right at the time his public is waiting for promotional efforts to push it, he's already engaged in the next project. This is always a bad move in the world of music, but in the current situation, where even first level acts struggle to get media attention, it is even worse. Now, sending notes to every press/news agency to let them know about a 'new galaxy awaiting' website, then letting it abandoned for months and months, it is close to stupidity, in strictly marketing terms.

Maybe it is due to receiving an underwhelming response from fans. Although I have seen no figures on the number of subscribers, maybe Prince expected much more, and when he saw the lack of interest, decided to let it go without further explanations.

Maybe it is due to the lack of a professional management & promotional team around Prince. Since his much discussed departure from WB in the mid 90s, Prince has been pretty much playing his own game with only temporal contracts with labels or enterprises to book tours. Curiously enough, the official reason for leaving WB is that he was not allowed to release as much music as he wanted; and then one wonders why did he release so little, by comparison, in his independent years. Curiously enough also, the big successes in the last years were marked by the presence of AEG and all their heavy promotional weight, first in the Musicology tour, then in the 21 nights in London. But it is becoming obvious that, when Prince is left to his own devices, the marketing & promotion drop to miserable levels, including often flops as announcements of shows in arenas which are cancelled in dates very closed to the supposed actual performance (Dublin anybody?).

Or maybe it is simply due to a lack of focus in Prince, possibly related to personal matters that I won't discuss.

Regardless of the actual reasons, the Lotusflow3r deception is being loudly heard in the community of hardcore fans of Prince music. Prince, or someone close to him, should take notice and react. Hardcore fans are not for granted, and their money is even less for granted. When you keep on disappointing them again and again, maybe a significant amount could decide to definitely stop wasting money on much hyped, new Prince websites, whatever future ones are created.

This is a A-Class Statement!